skip to main | skip to sidebar


I posted my marathon story on my running club web site and have been keeping receiving congratulations and comments. I have to make a special thanks to my professor, Roscoe Brown. Here is the mail I received yesterday. He made a comment to my marathon story -

Charles: You really did it. This is a great story - you deserve a lot of credit. Roscoe

Roscoe Brown is a military pilot in the Second World War Two, and one of the Tuskegee Airmen, and former commander of the 100th Fighter Squadron of the 332nd Fighter Group. Receiving Ph.D. Sports Education at NYU he was a professor and president in University. On March 29, 2007, Brown attended a ceremony in the U.S. Capitol rotunda, where he and the other surviving veterans of the Tuskegee Airmen (and their widows) were awarded the Congressional Gold Medal in recognition of their service.

President George W. Bush speaks during the Congressional Gold Medal ceremony for the Tuskegee Airmen Thursday, March 29, 2007, at the U.S. Capitol. Said the President, "The Tuskegee Airmen helped win a war, and you helped change our nation for the better. Yours is the story of the human spirit, and it ends like all great stories do - with wisdom and lessons and hope for tomorrow."

It is my great honor to have Roscoe as my friend, professor, mentor and sports coach in this country.

He is a nine times New York City marathon runner and the person bring me to this great race three years ago. He send me the training instructions and racing tip before the race and I always receive the first congratulation message from him after race. Here are a few messages he has sent to me -

Subject: Experience to Share - Present to 2006 New York City Marathon
GOOD LUCK!!!! WATCH YOUR PACE - NOT TOO FAST AT THE BEGINNING. The voice of experience - Roscoe

Date: Thu, 19 Oct 2006
Your training for the marathon looks adequate for a 4 hours time - but you must be very careful to keep your pace and not run too fast in the beginning of the race. Make a schedule and what time you should be at for 6 miles, 12 miles, and 18 miles and tape it to your wrist and try to meet that schedule. Roscoe

Subject: RE: Hi
Date: 20 Jun 2005
Congratulations on your marathon acceptance. I'll call you about training. Roscoe

In the meantime as an unique Chinese guy, and one of few Triathletes in the team (more than one hundred members in the team, some of the members are in professional level, fifty percent are Marathon runners). I am proud of my Chinese background and won respect and a lot supports from my running fellows. Here is a comment to my marathon story from the coach, Mr. Jud, competitive runner who is one of the fastest runner with his the best NYC Marathon time 2:48 and has been serious running for 20 years. He is a IT professional working for the New York Road Running Club.

“Chuck, I agree with Ben. You have always been a sincere and gracious competitor, and always appreciative of the gifts you have been given. We could all learn from you.” - Jud 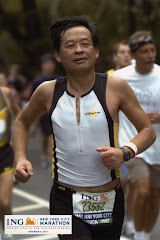 With Dr. Roscoe Brown in Office of University 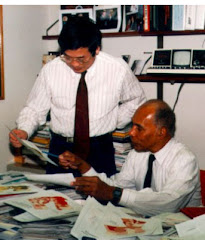 As a Research Associate and Project Director I Worked with Roscoe Brown at Center for Urban Education, CUNY in 1990's 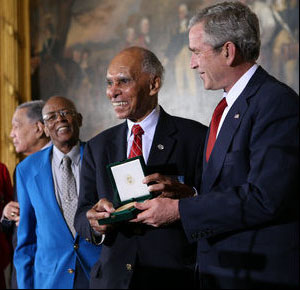